May 11, 2012
The next clue device we're going to cover is the charade clue. What on earth?!, you ask, and with good cause! Well, you know the parlour game of charades (not that we actually play them any more!)? People guess the name of a book, or a movie, or whatever, and you act out the name in pieces, possibly syllable by syllable, or word by word? Well, these cryptic clues are sort of the same, in that you string together the components of the clue, one after the other, in order.

So, for example, the word WHEEL could be clued as W + HEEL. That's a charade, one bit after the other, in order. A few more examples: SLIGHT = S + LIGHT, MANDRAKE = MAN + DRAKE, and GOSLING = GO + SLING.

This is a very common cryptic device, and you will come across charade clues in every cryptic crossword. s you can see, it's quite common to need to clue a single letter (such as the W in W+HEEL), so abbreviations are widely used in charade clues. Charades can also be used in conjunction with other devices (like anagrams or reversals).

These clues don't need indicator words, it's just assumed that as one part follows the next, you don't need any further instructions. Occasionally a linking word could be used, such as with, and, before, next to, on, over, takes, or with.


So, what does an actual charade clue look like? I'll write you one for the SLIGHT example above.

Petite soprano gets a lamp (6)

Petite is the definition. Soprano leads to the abbreviation S, and it gets, or is added to, another word for a lamp (LIGHT). That wasn't too bad, was it?

Carbon leads to the abbreviation C (remember your periodic table!). Add on a synonym for stink (REEK) = C + REEK, which is another word for little river! As you can see, this clue doesn't have any indicator words, or linking words, it's just one piece after the other, and a definition.

The apostrophe s on river isn't showing possession (something belonging to the river), but in fact is a contraction of is, in effect saying: another word for river is carbon + stink. This usage is very common in cryptics!

Now it's your turn to have a go. Here are 5 charade clues to practise on:

If you want to get some hints and explanation, scroll past Petal, very dashing in her top hat ... and the answers are at the end of this post. 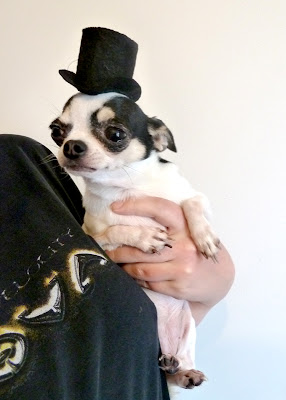 1. Daughter gets liquor tap (4)
Daughter often leads to the abbreviation D (as used in family trees and suchlike). So D gets liquor ... we know the answer is 4 letters long, so we're looking for a 3 letter name of some sort of liquor. How about RUM? Tap is the definition, and is defining a verb, not a noun.

4. Strong dislike to a variation (8)
The definition of this clue is at the start again, it's strong dislike. The wordplay is a report. To is a linking word, just joining the two parts of the clue. Now, in a little cryptic twist, the word a is simply that, in clear view: A. So we have A + a synonym for variation (VERSION).

5. South-easten remedy is stable (6)
South-eastern leads us to the abbreviation SE, from the compass direction. Another word for remedy is CURE. And stable is the definition. How did you get on?

January 10, 2013
American and British crosswords. Is there a difference? The short answer is HELL YES! Now for the long answer ... There are major differences between American-style and British-style crosswords (which are seen in Commonwealth countries too).  Crosswords were started by Arthur Wynne in 1913, a British man who lived in America, so both countries claim a close connection with the development of this popular puzzle. They developed in slightly different directions in each country, which has led to the varieties we see today. American-style crosswords are almost exclusively published in America, while British-style crosswords have spread through the Commonwealth — Australia, New Zealand, Canada, South Africa, and other English-speaking nations tend to prefer this variety of the puzzle, as well as the United Kingdom, of course. A quick look at these grids will show you the most obvious difference between the two varieties : British-style Note th
4 comments
Read more

May 29, 2013
The crossword was invented nearly exactly 100 years ago — yes, 2103 is its centenary! We all know that in that time it's spread throughout all English-speaking countries. But what about other countries? The answer is a resounding yes! In almost every country that I researched, they have crosswords. The forms are often a bit different from what we're used to — the grids are often non-symmetrical, 2-letter words are allowed, accented characters are often ignored, and sometimes the clues are written into the black squares. Here are some links to crossword sites from other countries, for your enjoyment. Afrikaans blokkieraaisel Part of a Chinese crossword Chinese   填字游戏 Danish  kryds og tværs Dutch  kruiswoordraadsel Finnish crosswords often include picture clues Finnish  Sanaristikko   French grids use a different numbering system French mots croises A German crossword German Kreuzworträtsel Greek  σταυρόλεξο   Part of a He
2 comments
Read more