American and British crosswords. Is there a difference?

The short answer is HELL YES!

Now for the long answer ...

There are major differences between American-style and British-style crosswords (which are seen in Commonwealth countries too).

Crosswords were started by Arthur Wynne in 1913, a British man who lived in America, so both countries claim a close connection with the development of this popular puzzle. They developed in slightly different directions in each country, which has led to the varieties we see today.

American-style crosswords are almost exclusively published in America, while British-style crosswords have spread through the Commonwealth — Australia, New Zealand, Canada, South Africa, and other English-speaking nations tend to prefer this variety of the puzzle, as well as the United Kingdom, of course.

A quick look at these grids will show you the most obvious difference between the two varieties :

Note the pattern of black and white squares. Both puzzles have symmetrical grids, and no two-letter words are allowed. 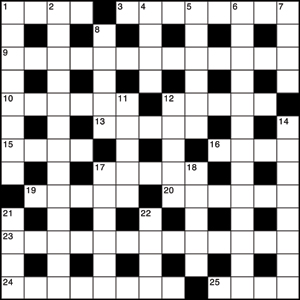 In the British-style grid above, there are a lot of black squares. Roughly half of the letters in each word are crossed over with another word (what's called "keyed" or "checked" in the industry). This is known as an alternate-letter grid - in general, every other letter in a word is checked.

In the American-style grid below, there are relatively few black squares, and every single letter in every word is crossed over by another word. The grid is fully "checked". So it's theoretically possible to solve a whole American crossword by only doing the Down clues, for example. 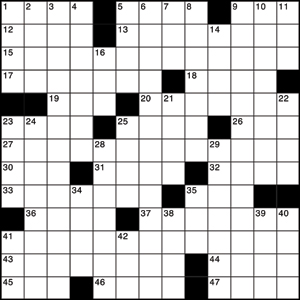 These two different grid designs lead to major differences in how these two varieties of crosswords are created and solved.

The more open grid structure of the British-style crosswords means that it's much easier for the crossword setter to put a wide range of words into the grid, and they are generally a bit harder to solve, as you get fewer clues for filling in the grid. Both 'quick' definition-type crosswords and cryptic crosswords fall into this design style.

The solid grid design of the American-style crosswords makes life much harder for the crossword setter — having every single letter in every single word crossing over another word is really restrictive. Setters often have to resort to abbreviations, names, unusual and archaic vocabulary, foreign words, brand names, sections of words, and other tricks to fill in the grid. Solving these puzzles can be a bit easier than the British-style ones, as if you're stuck on one word, you can look for the words that cross over it for further hints.

Just as different grid designs have developed in the two countries, so have different conventions for writing clues.

Quick Crosswords - these are straight definition clues. There aren't any tricks involved or any word play. Different levels of difficulty are created by whether the vocabulary used in the crossword is standard or more obscure, and whether clues are specific or general. General knowledge, archaic words, and common words in other languages are often included.

An example : Bird (4) = TEAL is a difficult clue - there are a lot of birds with 4 letter names! Small duck (4) = TEAL is an easier clue, as you're given more specific information.

Cryptic Crosswords - these fiendish crosswords have the same basis as the British quick crosswords, but that's where the similarity ends! Each clue is a mini-puzzle in its own right. There are a lot of rules and conventions about how these clues are written (see my "Cryptic Class" to learn more about cryptic clues). Each cryptic clue must contain a 'base clue' (synonym for the answer) as well as some word play. This can include double definitions, anagrams, homonyms, charades, puns, amongst many others.

An example : Bird colour (4) = TEAL — as TEAL is both a colour, and a type of bird. This is a double definition clue.

NB : British crosswords tend to have the letter count for the answer in brackets after the clue, but American crosswords don't.

American-style crosswords have a wide variety of clues too. And another major difference with American crosswords is they often have a title and theme. The themed crossword entries are generally some of the longest words in the puzzle, and are placed symmetrically within the grid. Somewhere around three to five words in the crossword will relate to the theme. These theme entries can be words, phrases, or puns, or a whole host of other conundrums. The title for the puzzle usually gives a clue as to the theme.

There are the standard definition clues, as in the Brit's quick crosswords. However, there are also a lot of general knowledge clues, such as the names of actors or authors, movie titles, song names, and other trivia.

Abbreviations are common; these clues are usually indicated with abbreviations included in the wording of the clue. For example : Some sts = AVES  ("Some streets are avenues").

So long in Rome = CIAO (an Italian farewell)

There is a wide variety in these sorts of clues; the setter may sometimes also engage in a bit of word play, with pun clues indicated with a question mark.

So as you can see, each crossword variety holds its own challenges, but luckily they are all fun to solve!

May 29, 2013
The crossword was invented nearly exactly 100 years ago — yes, 2103 is its centenary! We all know that in that time it's spread throughout all English-speaking countries. But what about other countries? The answer is a resounding yes! In almost every country that I researched, they have crosswords. The forms are often a bit different from what we're used to — the grids are often non-symmetrical, 2-letter words are allowed, accented characters are often ignored, and sometimes the clues are written into the black squares. Here are some links to crossword sites from other countries, for your enjoyment. Afrikaans blokkieraaisel Part of a Chinese crossword Chinese   填字游戏 Danish  kryds og tværs Dutch  kruiswoordraadsel Finnish crosswords often include picture clues Finnish  Sanaristikko   French grids use a different numbering system French mots croises A German crossword German Kreuzworträtsel Greek  σταυρόλεξο   Part of a He
2 comments
Read more

May 11, 2012
The next clue device we're going to cover is the charade clue. What on earth?!, you ask, and with good cause! Well, you know the parlour game of charades (not that we actually play them any more!)? People guess the name of a book, or a movie, or whatever, and you act out the name in pieces, possibly syllable by syllable, or word by word? Well, these cryptic clues are sort of the same, in that you string together the components of the clue, one after the other, in order. So, for example, the word WHEEL could be clued as W + HEEL. That's a charade, one bit after the other, in order. A few more examples: SLIGHT = S + LIGHT, MANDRAKE = MAN + DRAKE, and GOSLING = GO + SLING. This is a very common cryptic device, and you will come across charade clues in every cryptic crossword. s you can see, it's quite common to need to clue a single letter (such as the W in W+HEEL), so abbreviations are widely used in charade clues. Charades can also be used in conjunction with other devic
1 comment
Read more